Skip to content
Home7 Things That Won’t Happen in 2020

With the new year comes the inevitable predictions. A lot of things the mass media tried to convince us would happen in 2019 didn’t. There was no taxpocilypse, no WWIII, and the polar bears are still fine. As the left fantasizes about impeaching Trump and inflicting the Green New Deal aka Eco-fascism on this country the rest of us live in reality and know better. While the alarmists, Fabian socialists, and talk show hosts try to tell us what will happen, these are some things despite what they say, history and common sense suggest definitely won’t:

1. Democrat Impeachmentpalooza subsiding. It won’t subside in 2020 and not while a Republican inhabits the White House. The Democrat’s obsession with impeachment will continue. If it’s not the President, it will be AG Barr, a conservative Supreme Court Justice, they’ll probably go after Mitch McConnell, for not playing along with their game.

2. Bernie Sanders getting the Democrat nomination. The socialist left loves him, but that won’t be enough to get him the nomination when the “Bern” wears off, Democrats will choose to go with a candidate that they think can actually win the general election.

3. Reduced Government Spending is not in the cards for 2020. The Republican phobia of government shutdowns will heighten in 2020, as a result just about any spending measure that comes up will be rubber-stamped. For President Trump, getting the wall built is worth whatever pork that either party cares to throw in the budget.

4. Miami, NYC, and New Orleans sinking under the sea. Members of the Church of Climate Change post these dramatic pictures of cities and coastlines underwater. The problem with those pictures is that they go by inches above sea-level. But, hold on, several cities that you can walk around without a scuba suit today are already below sea level, for example, Amsterdam, which has been simultaneously populated and below sea-level for centuries, ditto, Venice. The Dutch figured out how to keep the land from flooding with a complex system of dikes and levies. The Venetians came up with an even simpler solution: Make all second floors first floors and build bridges everywhere. It’s a safe bet that 21st-century engineering can tackle the problem of rising sea levels.

5. A deal with N. Korea. Talks may continue, saber-rattling will certainly continue, but no formal deal will be reached. Having nuclear weapons is a point of pride for Kim Jong Un, and he really has nothing else to offer his people or the West. Nuclear blackmail is Kim’s chosen way out. His strategy is to survive until he has a working ICBM he can hold to our heads in exchange for the sanctions being lifted.

6. Britain finishing the year as part of the EU. In America, the left’s obsession is with removing Donald Trump. In Britain, the white whale for the globalist elite has been derailing Brexit and keeping the U.K. in the EU. Their efforts have been reduced to flailing, their last hope was to unseat Brexit favoring Boris Johnson in favor of Jeremy Corbyn, who as it turns out, is too far left for even the British.

7. A Democrat being elected president. Barring some sort of catastrophic downturn in the economy or some other crisis, President Trump will be reelected. Trump is as unpopular with the left as Obama was with the right, maybe even more so, but as we learned in 2012, a president wildly unpopular with nearly half the country, even with a lackluster economy can hang on for reelection if the other side does not have the right candidate. Joe Biden is an exceptionally flawed candidate, but he leads a pack of candidates that either moves so far left that they can’t be seen from the center, or they are not what the ascendant activist wing of the party is looking for. 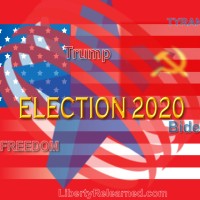