Skip to content
HomeThoughts on Life, Liberty, and the Pursuit of Happiness. 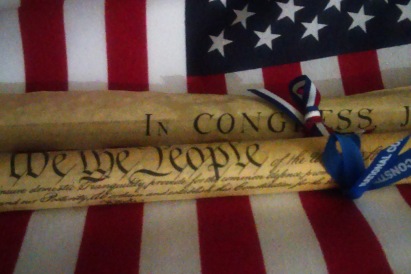 As we celebrate the signing of the Declaration of Independence, here are some reflections on its key concepts:

Life:  Life is the basic right of every human being.  All good laws should contribute to its protection and edification.  What life should be protected?  All of it, as much as can be.  Civilized humans avoid needless violence and killing.  Killing animals for food and other resources is the way of life, killing purely for sport, or out of cruelty is the way of death.  The unborn?  We’ll if it’s a life, then yes.  The old and the sick?  Death is also part of life, but again, it should not be brought about wantonly or casually. People talk about dying with dignity, especially as a rationale for euthanasia.  I prefer the idea of living with dignity.  How is it beneath anybody’s dignity to fight until their very last breath?  Being in a pitiful physical state does not equal being pitiful in a spiritual state, on the contrary, it is often the opposite.

Liberty:  Liberty is the chance to use our gift of life to its fullest advantage.  Without basic liberties, mankind is held back from reaching its fullest potential.  That is why liberty curtailing forms of government like Communism and Socialism are immoral, or at best, amoral. Liberty comes with the freedom to fail, and learn from our mistakes.  Liberty, the Founders knew, is a fragile thing, easily destroyed.  We must protect our liberties jealously because once lost they are very difficult to regain.  Of all the laws that have ever been passed, how many have increased liberty?  Very few compared to the number of those that limit it.

Our American government has done well extending liberty to classes of people that once lacked it.   That is government at its best.   The problem is that government rarely expands the freedoms of its citizens at large.  Upon gaining the rights of the majority those same formerly oppressed groups find themselves at the lifetime high water mark of their freedom, only to have other liberties gradually taken away and suppressed by mountains of regulation.  It’s like a castaway that washes up on the beach of an island to safety, only to find the beach is eroding into the sea.  Our freedoms are like those grains of sand, being eroded one by one until someone decides to fight it.

The Pursuit of Happiness.  “The U. S. Constitution doesn’t guarantee happiness, only the pursuit of it. You have to catch up with it yourself.”  –Benjamin Franklin.  The Declaration of Independence only suggests that humans have that right to pursue happiness, but the achievement of it can only be done by ourselves. The biggest mistake is to confuse happiness with pleasure. Drugs can produce pleasure, but never happiness. Pleasure is fleeting, true happiness can be maintained over much longer periods of time.   The other mistake we humans make is to think that happiness will just happen.  Sometimes it does, but most of the time it must be earned.  Members of the Armed Forces often forgo the happiness of home and family for long periods of time so that they and others can have it to a fuller degree when they return.  The miracle of happiness is that giving it produces more of it.

One thought on “Thoughts on Life, Liberty, and the Pursuit of Happiness.”