Skip to content
HomeTime to decide what kind of people we want to be.

“Those who would give up essential Liberty, to purchase a little temporary Safety, deserve neither Liberty nor Safety.” – Benjamin Franklin

It’s time to decide people, liberty or safety. In early July, 1776, the people made that decision. They chose liberty. Again and again during the last two centuries, Americans made the same choice for liberty. After September 11th, 2001 we tried to choose both, security and freedom. Nearly 20 years later, we’re discovering the possibility of having both, a fraud. Politicians and members of the “deep state” abused their powers, took advantage of the fact that we gave up some liberties for greater freedom , and used them to subvert the Constitution and attempt to overturn the results of an election. We gave up some freedoms in return we thought, for security and we got burned. To be specific, we entrusted our intelligence and law enforcement agencies with augmented powers to surveil American citizens. They abused that power. Now, in the year 2020, we are forced to make that decision again, to decide whether or not America’s primary value will be liberty or safety, because as Franklin knew, only one can be paramount.

Now, with the plague of COVID-19 upon us, we have been asked to give up our freedoms for the promise of security. If you live in a Democrat lead or “blue” state or city, that choice has been made for you, and all too easily. That choice was the promise of security from COVID-19 over your individual freedoms. Most of the people in this country are living under edicts restricting our movements and actions in almost every setting. This has been done with nary a law being passed by any legislature anywhere, usually by governors or mayors without the authority under the US or state constitution far exceeding any authority given to them under any democratic process.

Meanwhile, those same governors and mayors give contradictory directives with regards to protests. You can protest, but you can’t have a fireworks celebration. You can advocate against police brutality and even for the destruction of the United States as we’ve known it, but don’t dare protest for your right to go back to work, school, or church. These are actions that would have been unthinkable just a few years ago, and impossible a couple of decades ago. Just over 50 years ago, America was hit by the Hong Kong Flu pandemic, that according to CDC estimates, claimed approximately 100,000 American lives. There were no lockdowns, no social distancing or mask mandates. So what has changed? America was founded on freedom, but with that freedom, almost as a prerequisite, the notion of personal responsibility had to be a chief and complimentary value. Academia and the media have pushed away personal responsibility in exchange for collective responsibility. Collectivism as promoted by Marx and others was the driving force behind that change. Now, the idea of personal responsibility, which can be summed up by the phrase: “I do not ask you to take care of me, but by the same token, you do not have the right to expect that I must take care of you” Collectivism turns that on its head, as best summed up by the phrase: “ I demand you take care of me, and I’m not to be held accountable for my own situation, as others were responsible for it.” This has led to a popular attitude that rather than one wear a mask to protect oneself and one’s loved ones, that it is the moral obligation is to put the needs of the collective over the needs or desires of the individual. You may ask with this in mind: “But don’t the needs of the many outweigh the needs of the few?” Aren’t the governors right to demand everyone wear a mask in public? But that argument, noble as it sounds, fails to recognize a co-equal value, the value of personal freedom. To the conservative/libertarian, the safety that comes with people wearing masks in public, and the associated public health benefits, is not the problem. Nor is an alleged non-understanding or rejection of science on the part of conservatives and libertarians the problem. The problem is in the mandate itself, coming not with the consent of the governed, but from the governmental elite, who consider themselves our moral and intellectual betters. Most Americans it turns out, don’t like to be ordered around.

We’ve traded at times freedom for safety to those who insist they know what’s best for us, only to see them abuse our trust. When citizens on the political right chafe against directives to wear a mask, or stay at home, the issue is not the efficacy of masks, it is with the collectivist philosophy that is in direct opposition to the individual rights and responsibility paradigm that forms the basis of American values, values held by our founding fathers and every succeeding generation of Americans until the present one. These values, lest they be dismissed as obsolete, arguably contributed to a great degree to what’s referred to as “American Exceptionalism”. That is to say that America is exceptional because, and not in spite of this link between freedom and responsibility. That is the choice, the collectivist mentality as prescribed by Marx and his like, or the one-two punch of personal liberty and personal responsibility. One path we’ve seen ultimately leads to individual freedoms being extinguished in the name of the “greater good”. The other a path being the one set out for us by the Founders; the freedom to forge our own destiny in exchange for (what’s now) hundreds of millions of citizens taking on individual responsibility. Do we dare make that trade that Franklin famously warned us against, or do we hold true the vision of our founders, that of a free people governing themselves? Meditate on this. 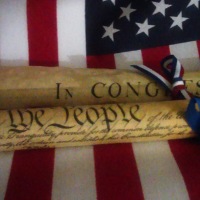